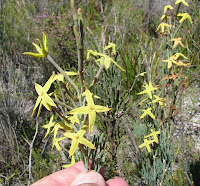 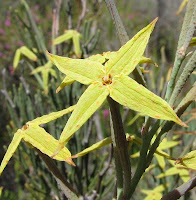 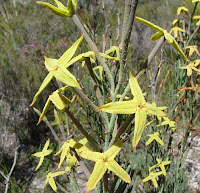 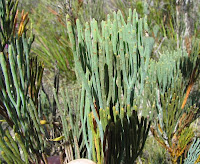 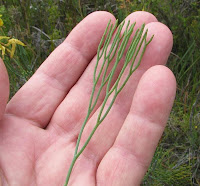 
A most unusual looking shrub growing to around 11/2 metres (5') in height, with warty (glandular) foliage and flowers. It is not the sort of plant you would automatically think is related to Banksia, Hakea, Grevillea, etc, but on examination it has the same four lobed perianth, which in this instance are large, colored and petal-like, compared to the usually much smaller and often recurved ones of most other genera. They also have the four anthers (distinctive of Proteaceae), but these are attached to the perianth tube, rather than the lobes as are most other species.

This heathland shrub is quite common and grows on sandy rises and low hillsides, particularly on the downside where underground seepage slowly flows from one ephemeral swamp to another. It usually comprises several upright branches that are clothed in pale blue/green fleshy forked foliage, which fork repeatedly at their tips to produce a bundled upright leafy structure of similar height. The yellow flowers are around 3 cm diameter (over 1") and will produce terminal blooms for up to ten months of the year (January to October). However, the flowers do not attract birds, but rely on insects for pollination.