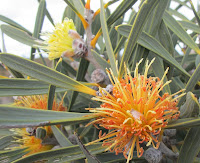 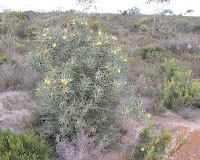 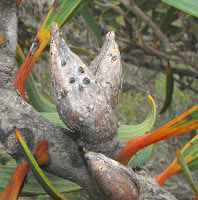 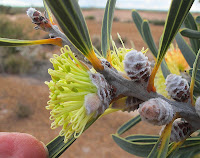 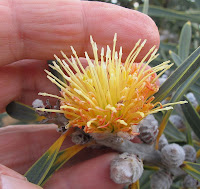 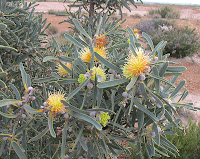 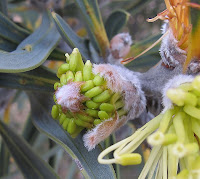 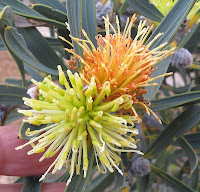 A common Hakea of the Esperance region, favouring low-lying sandy areas, often over-lying clay or heavy gravel soils. The Ashy-leaved Hakea is a striking bushy shrub to 2.5 metres (8') in height with thick, leathery, ash colored, grey/green leaves, plus very brightly colored flowers that are initially yellow/green, but mature to orange. Probably too slow growing to become a popular garden shrub, but would be a prized subject for those with patience.

Although this plant is not uncommon in the inland mallee region, it is very common in near coastal non-calcareous soils from Ravensthorpe (175 km or 110 miles west of Esperance) to Israelite Bay (175 km east of Esperance).  Thereby making the Esperance region central to Hakea cinerea.

The bright flowers that are around 3 cm (over 1") diameter, attract birds and insects alike and probably the honey possum. They are situated at the base of leaves on growing branches, thereby providing an excellent floral display on the outer parts of the shrub. Officially recorded flowering from August to November, however the above were photographed in July.