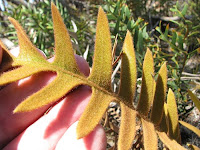 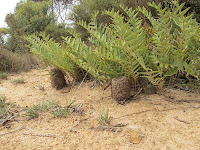 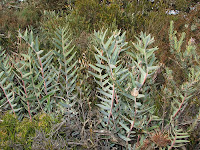 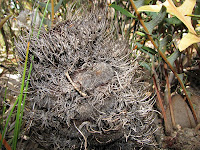 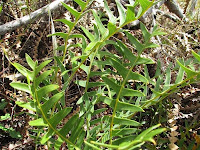 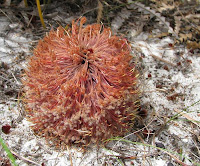 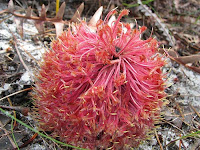 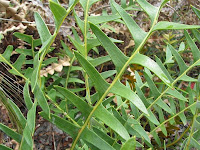 The shape of the foliage closely resembles several water-ferns from the genus Blechnum that are common to many parts of the world, but that is where the similarity ends as relationships are so remote they are not worth consideration here. The foliage of this Banksia (growing to almost half a metre, or 1'6" tall) is thick and leathery and the pointed tips sharp, and although those in the photographs are green, some have an attractive bluish hue. The flowers vary from the orange/red above to a reddish/pink and can grow to 15 cm x 7.5 cm diameter (6"x3"). They sit on top of the ground as do the stems, making the plant susceptible to bushfires, which then require the Banksia to regenerate from seed. However, unlike Banksia repens, this species grows quickly and commonly flowers within 2-3 years to then usually bloom annually.

I have not found this species in coastal areas, nor in the drier inland mallee region, but in the wheatbelt between, surviving in bush pockets and roadside reserves to the north and west of Esperance, where extensive colonies can occur. Preference is for deep sandy soil, but is often encountered on flat low lying areas where moisture is retained for longer periods. Despite this preference, it is very drought resistant and will happily prosper in much drier locations from dry heath to mallee type woodland. Normally flowers from September to December.