A very attractive shrub of around 4 metres (12') in height, with bright green foliage and striking orange, red or yellow flowers. This species is divided into two varieties based largely on flower color, with the orange and red form being described as variety inermis, while the yellow form is classified variety drummondii. In the Esperance region the orange/red flowered form is by far the most common, with only a scattering of the yellow variety, however the yellow one is quite common further west, particularly in the Albany region.

Both forms prefer low-lying sandy areas specifically in seepage zones around freshwater swamps and along flood plains. The sandy soil commonly overlie heavier clay ones that create the seepage conditions as the moisture moves along on top of this less permeable barrier. This habitat preference has unfortunately placed many of these plants directly in the path of the die-back fungal disease, Phytophthora cinnamomi, which slowly kills them off over several years. Their demise begins with leaf drop that becomes progressively worse, along with a gradual reduction of flowers as the fungus destroys their root-system. Despite this fatal fungal disease, this Lambertia species is currently very common, often forming large dense thickets in suitable environments.

The large flowers are a good 5 cm (2") in overall length, which combine with others to form a curved wheel-like arrangement of over 8 cm (3"+) diameter. They are popular with honeyeating birds and various invertebrates, but may also play an important role in the livelihood of the tiny honey-possum as the Chittick flowers for most of the year, plus the dense thickets would also provide protection from predators. 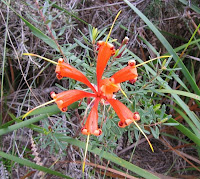 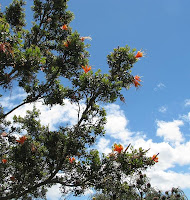 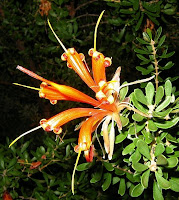 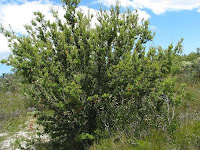 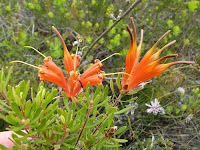 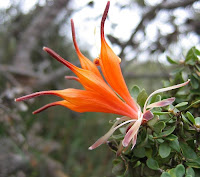 
This orange and red form may grow a little larger and flower longer than the yellow variety. In dense thickets it can reach to 6 metres (20') and flowers can usually be found at anytime of the year, although spring and early summer is their main flowering period. 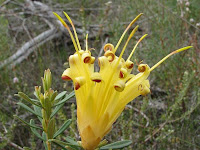 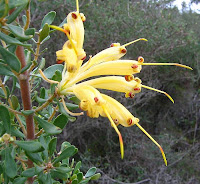 This variety is not common in the Esperance region, although it is widespread occurring as occasional plants here and there. Their main flowering period is spring and summer.

Posted by William Archer at 5:25 PM