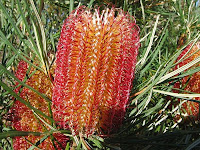 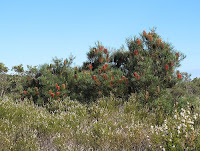 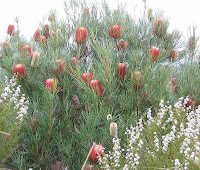 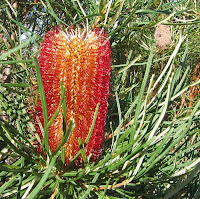 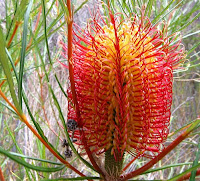 A very spectacular Banksia, but with a very unimaginative common name that does not reflect its beauty. It grows in sand/peat soils around ephemeral freshwater swamps (its base sometimes inundated for a number of weeks), it also favours drainage channels, flood plains and seepage zones. A fast growing plant and early to flower (within 3 years), usually very bushy except when in dense thickets; its height is highly variable being between 3-6 metres (10'-20').

The Red Swamp Banksia is not a particularly long lived shrub/small tree and its life is often further reduced by the Dieback Root Fungal Disease, Phytophthora cinnamomi, whose spores are transported by water along watercourses and drainage channels, thus right in the path of this banksia. Fortunately due to its quick growth and early flowering, it usually produces seed before it succumbs. With most WA banksias, the follicles will only open to release seed after a bushfire, but with this species some will do so without this influence, which has meant that sufficient seed is usually released and will germinate in unburnt habitat, thus preserving the species in dieback infected areas. If a bushfire does pass through, there will be a much higher germination rate. I have noted in drainage channels, the dieback spores can apparently be flushed from the depression, permitting a longer-term recolonisation.

The scarlet and gold flowers can grow to 20 cm (8") in length x 7.5 cm (3") diameter and will attract many honeyeating birds to produce over 50 narrow lipped follicles, each producing two seeds, so they are quite effective in the reproduction stakes. Flowers are normally produced in spring and summer, but will do so at other times too.