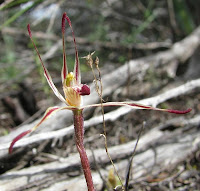 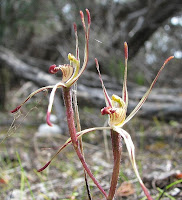 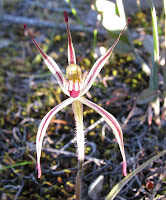 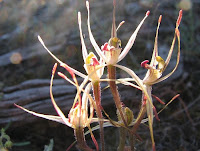 
This spider orchid is not only small with fine tepals (similar looking sepals and petals) and a flower between 20-40 mm diameter (a little over 1"), but is beautifully camouflaged amongst the leaf litter and dead twigs in its dry mallee environment, so if you can't find them, don't be upset because it is a hands and knees activity to spot them. Commonly growing to around 100 mm (4") in height in drying (dull grey/green) moss, on a fine sand/clay soil over limestone, which in turn rests over low-lying granite outcrops. I have not found the sigmoid orchid in soils directly over the granite and suspect the limestone is an important requirement for the species. Zones where non-limestone soils (acid) are directly over granite, they are favoured by the more common Caladenia microchila, the Western Wispy Spider Orchid that is easily seen in this environment, and which sometimes hybridises with the sigmoid orchid.


Like most plants in the drier mallee region, they are very opportunistic in their irregular and low annual rainfall environment (250-350 mm or 10"- 14") to take advantage of good falls to flower. I have seen them in bloom as early as May after good autumn rain and September/October when rains have been late. So attention to seasonal rainfall in these areas is extremely important when orchid hunting.


These orchids have a couple of interesting features; for one they emit a pheromone chemical from the glands at the tip of the tepals to attract Thynnid Wasps, who cross-pollinate them whilst seeking a mate. The second is the shape of the labellum, which in this species the tip curls up, instead of curling down like most other spider orchids. To emphasise this distinction, I particularly like the photo above with the four flowers appearing to be singing lustily, no doubt after a few drinks.

Posted by William Archer at 7:25 PM