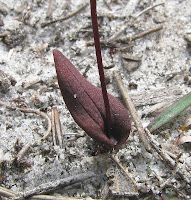 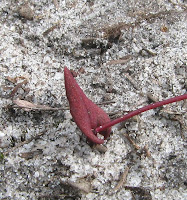 Easy to identify from other Duck Orchids by the dark calli which covers most of the humped labellum. It flowers from August (usually late) to October.

Duck Orchids like several other orchid species, use pheromones to trick male Thynnid wasps to mate with the calli on their labellum, but when it lands it triggers the labellum flicking it downwards and propelling the wasp into the stigma and anthers. This process deposits pollen on the back of the wasp, which is later transferred to other duck orchids when it attempts to mate again, so performing cross-pollination.

Posted by William Archer at 9:54 PM