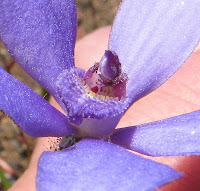 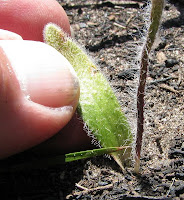 
A large purple/blue flower to 50 mm (2") diameter, but usually less than 150 mm (6") in height. Flowers September/October on acid soils and often found on sandy slopes near ephemeral swamps and around granite outcrops. I have rarely found them together in any numbers, but more often as single or a few well-spaced plants, although they can be very common after summer bushfires. The leaf is relatively small and broad being to 40 mm x 20 mm wide (11/2" x 3/4"), which on the facing side it is green and hairy, but on the reverse is hairless and although initially green matures to the purple brown.

Update 22/12/08
The illustrations above have been changed to take into account the differences of three similar china orchids of the Esperance region according to a recent publication 'Orchids of Western Australia' by Andrew Brown et.al. Apparently the orchid I had previously listed as the Blue China Orchid is a new species and now tentatively called Cyanicula sp. 'Esperance' - Esperance China Orchid. To hopefully escape the influence of this orchid, the photos above were taken from plants 80 km NE of Esperance.