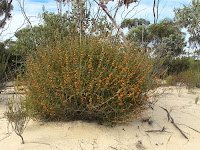 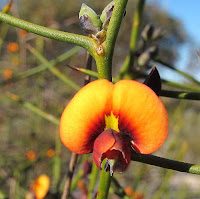 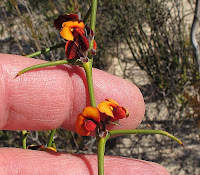 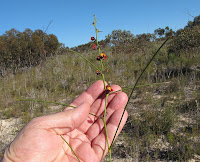 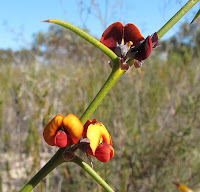 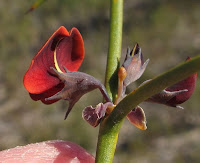 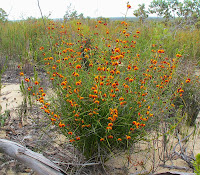 
Daviesia major was until recently known as Daviesia hakeoides var. major, due to the enlarged shell shaped bracts that can be seen at the base of the pedicel (flower stalk), which were a distinguishing feature for the Daviesia hakeoides group. However Daviesia major was removed from this grouping because of the distinctive larger bracts (4-5 mm or 3/16” in length), which are reflexed. Also the acuminate calyx-lobes (tapering to an acute point) each with a pale stripe.

This species has a limited distribution NW of Esperance to the Frank Hann National Park (180 km or 110 miles from Esperance) and again between Cape Arid and Israelite Bay (east of Esperance). It grows to a metre (3’) in height and the slender stems of around 1.5 mm in diameter (1/16”), show-off the brightly coloured flowers (to 1.2 cm or ½” diameter) and surprisingly produce a shrub that is quite bushy.

From the colonies I have encountered the plant prefers deep sandy soils, at or near the summit of tall sandhills, where it can be quite common, particularly after bushfires that reduce plant competition and assist with their seed germination. The phyllodes are the horizontal (stem-like) projections, growing longest at the bottom, then decreasing in length up the stem to the smallest at the top, which I might add are quite flexible and not as prickly as they look.

The best flowering period is during August and September, although odd flowers can (with suitable weather conditions) be found either side of these months.

Due to their bitter taste when nibbled, Daviesia plants are commonly known as Bitter-peas, whilst the Daviesia genus in WA (as with all other pea-flowers), has now been placed into the Fabaceae family along with Acacia and other legumes. However other Botanical Authorities may place them in different families depending on the classification system being used.