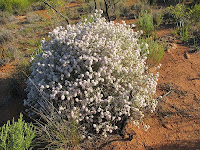 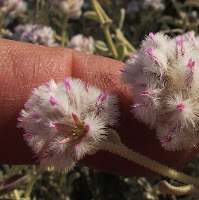 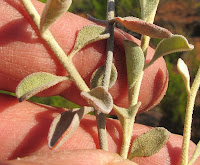 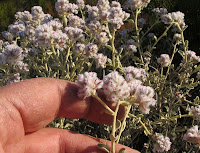 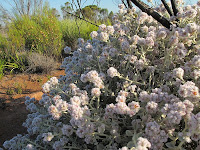 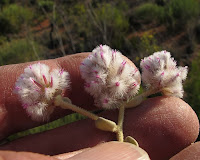 
I came across this species 140 km (85 miles) NE of Esperance, which considering its most southerly record is nearly 200 km west of Kalgoorlie and about 460 km (285 miles) NW of the above encounter, can be a little disturbing to collectors. These large discrepancies are not unusual in this part of the country, as vast areas are rarely if ever visited with only a few widely spaced 4WD tracks, so there would be many plants awaiting discovery.

Ptilotus obovatus var. obovatus was quite common on a large plain where shallow loams overlie granite or limestone, thereby restricting the size of the plants able to survive in this hot and low rainfall habitat, consequently any trees are small, few and far between. A fire had passed through the area 2-3 years before making conditions ideal for plant growth, which at other times may have limited the number of species present.

This plant is also known as the Smoke Bush or Silver-tails and besides WA occurs in the inland of NT, SA, NSW and Qld. There is another variety (var. griseus), but in WA it is only recorded centrally near the SA boarder and has pink flowers. Ptilotus obovatus var. obovatus grows to around a metre (3’) in height and generally forms a compact rounded shrub; the foliage and stems are densely covered in small-branched hairs, which is an important identification feature.

In WA flowering is recorded from June to December, but there would be some variation to this depending on location and rainfall.

Posted by William Archer at 7:47 PM