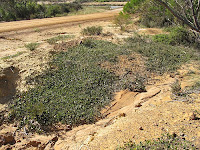 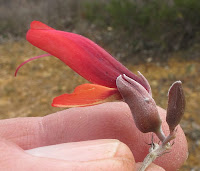 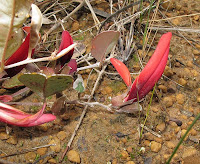 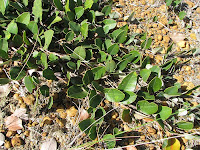 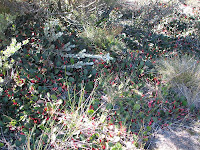 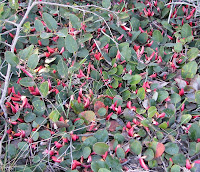 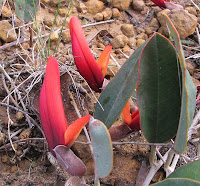 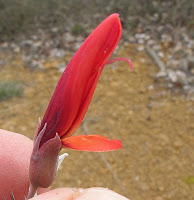 The genus Gastrolobium was reviewed by Chappill, Wilkins and Crisp in their Taxonomic revision of Gompholobium in 2002, in which the Brachysema genus was absorbed into Gastrolobium, however their toxicity if any are largely unknown. Gastrolobium latifolium was before that date known as Brachysema latifolium the Broad-leaved Brachysema. This is a prostrate species with large broad leaves and bright red flowers that commonly grows between Israelite Bay (east of Esperance) to Albany (west of Esperance), favouring non-calcareous soils within 50 km (30 miles) of the coast.

Like most pea-flowers, Gastrolobium latifolium does very well after bushfires or soil disturbance that removes plant competition and stimulates seed germination. Plants are at their best from 2-5 years after this trauma, but visually deteriorate to become tattered as other species around them begin to dominate available moisture and drop dead vegetation onto them. This and other stresses cause leaves to die back and spoil a once eye-catching species. Plants however are not short-lived and will persist for many years to form extensive carpets of vegetation, although these are probably made from several individuals growing together.

Generally Gastrolobium latifolium prefers the heavier loams or gravel in flat locations, often along drainage channels that are moist to wet during winter, but can be very dry during summer. Moisture availability is probably more important than sun or shade as these plants can thrive in either aspect. The flowers are bird pollinated and bloom from August to November, but being a moisture loving species will only do so if conditions are favourable, this even applies to plants in neighbouring habitats when one dries more quickly than the other.

Posted by William Archer at 5:02 PM