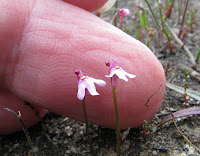 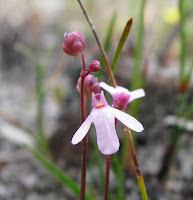 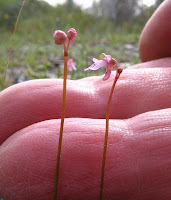 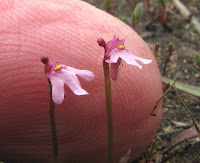 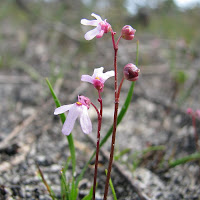 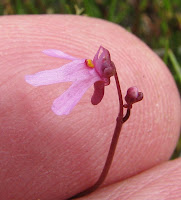 
Utricularia tenella is an annual species and one of the smallest insectivorous bladderworts. The flowers are less than 5 mm (under ¼”) diameter and a delicate pink color, whilst the stems vary from 2-8 cm (3/4”-3”) in height. The feature of note however is the nectary spur (below the petals) that is roughly the same length as the covering central petal-like structure. I mention these features as there is a similar looking bladderwort called U. multifida that grows in the southwest portion of the State, but with that species the flowers and stems are usually much larger, although the nectary spur is only half as long as the central petal-like structure.


Both of the above Bladderworts were previously placed in the genus Polypompholyx (the pronunciation should not be attempted after a night on the town) and were known as Polypompholyx tenella and P. multifida. This separation was due to the number of sepals (calyx lobes that initially enclose the bud) that each genus had, with Polypompholyx having 4 and Utricularia 2, but now Polypompholyx has been absorbed into Utricularia. The sepals can be seen at the base of the ovary (without the petal-like structure) and developing into a seed capsule.


The Pink Bladderwort is known to occur to the east of Esperance, but to the west there is a gap until Bremer Bay, then largely around the coast in scattered colonies to the north of Geraldton (a considerable distance). It is also found inland, but always within the Wheatbelt region and not recorded for the drier Mallee.


Being a small plant, Utricularia tenella requires an open situation, so is found in shallow soils on moss covered granite outcrops where other vegetation is limited, or wet heath where soils are peat/sand with fine clay that dries hard during summer, but will hold water after heavy rain. Again a habitat that provides many open spaces as the wet/dry conditions are too harsh for most larger smothering plants. Very often after heavy rain a few shallow depressions will fill with rainwater, but these usually evaporate or drain after a few days. However moisture retained in the peaty soil is sufficient for micro semi-aquatic life to survive and provide Utricularia tenella via their tiny (1.5 mm or 1/12” dia) traps with essential nutrients.


Being an annual species, their lifespan is invariably short and reliant on moisture availability, therefore they set seed readily and quickly, but it also means you need to be in the right place at the right time or you will miss them. They are recorded as flowering from August to November, but these times are very reliant on the reliability of seasonal rainfall. Locally, late September and October are usually the best time to catch them.