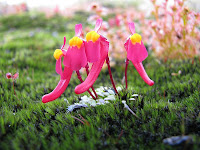 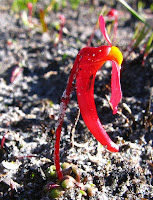 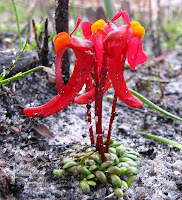 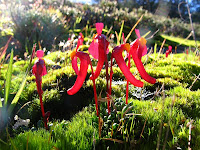 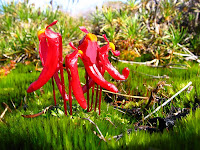 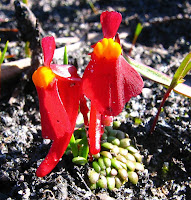 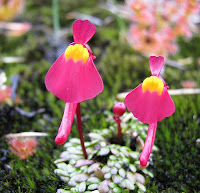 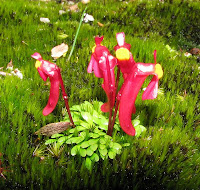 Plants in the genus Utricularia belong to the Lentibulariaceae family, but are commonly known as Bladderworts. They are carnivorous herbs (non-woody), trapping and consuming small aquatic animals by use of a bladder (as a replacement of true roots), which when touched spring open to suck up the animal with the inflow of water. The animal slowly decomposes to provide the plant with nutriments in their otherwise nutritionally poor habitat.

Each bladderwort has a number of traps with one at the end of each stolon (root-like) that emanate from a central corm (plant producing bulb-like structure), so plants are often in small groups. The traps are relatively small, between 1-2 mm (less than 1/8”) in length, but so are their prey, which is anything small enough to be sucked into the bladder.

Utricularia menziesii is a very common and widespread plant (from Israelite Bay east of Esperance to the north of Perth) on near coastal moss covered granite outcrops, or on the edge of drainage channels carrying flood water from one swamp to another. They don’t actually grow in water, but in waterlogged soils, particularly those that are slow moving or draining, which probably carry living organisms their way.

The beaming red flowers are between 2-3 cm (1”) in length and despite their fragile appearance, will bloom over several weeks providing the moisture does not dry up. When conditions do become too dry Utricularia menziesii will die back to the corm, where it will remain dormant until the following growing season. The flowers themselves do not trap insects, but are functional and serve only to attract suitable pollinators. Flowers are produced from June to September and are well worth seeking out.

Posted by William Archer at 4:08 PM