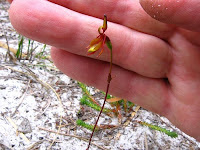 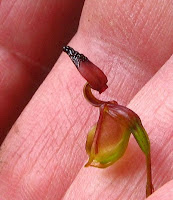 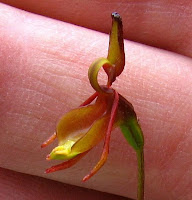 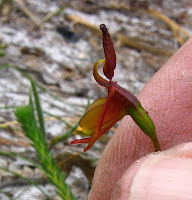 This duck orchid is the last Paracaleana species to bloom here (October to November) and is rarely seen flowering with the common Flying Duck Orchid P. nigrita, which is usually well finished before this Duck Orchid appears.

The labellum is quite distinctive with the dark calli restricted to the upper third section.

Update 11/10/08
The name of this orchid (in this district) has recently been changed from Paracaleana triens, the Broad-billed Duck Orchid to Paracaleana disjuncta. However P. triens is now restricted to the west of Esperance, with this species overlapping slightly and also found well to the east. The western (P. triens) species apparently has a broader labellum, with a broad oval leaf shape, whereas P. disjuncta has a broad linear to elliptic shaped leaf. The Broad-billed species lies outside the Esperance area so should not confuse local identification. Photos of the leaf shape (15-30 mm, or a little over 1/2"-1" long) of P. disjuncta have been added. 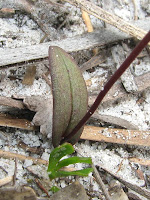 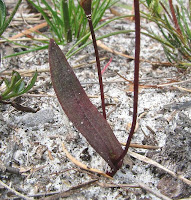 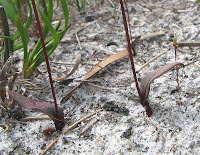 Posted by William Archer at 7:56 PM