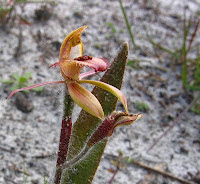 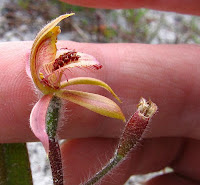 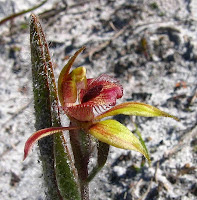 
Also known as the Dancing and Antelope Spider Orchid, it has a colourful flower 20-30 mm diameter (1") with an upright densely hairy leaf. There are no other orchids in the region like it, so is unlikely to be confused with other species.

I have a single small colony near me in deep sandy acid soil (Banksia heath) and elevated 1-2 metres above a large ephemeral swamp. It is growing less than a metre from a fence line and next to a power pole. They have survived the construction of the fence and having a heap of sand dumped on them (later removed by self), plus the placement of the power pole. Initially there were only a couple of plants, but now there are close to ten, so there are doing very well considering. Flowering time is from August to October.
Posted by William Archer at 12:10 PM