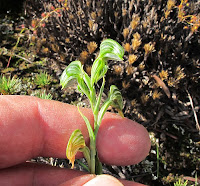 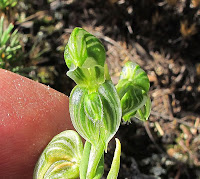 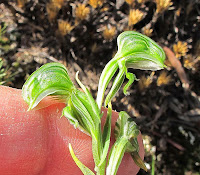 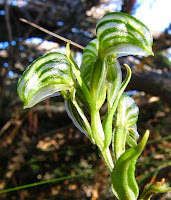 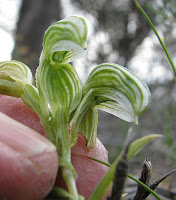 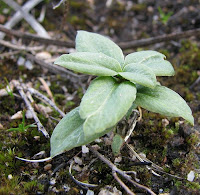 Greenhood Orchids are not particularly common in the larger Esperance region, despite there being over twenty species. More than half of these are undescribed, which gos to indicate that they are often habitat specific and generally do not occur in large colonies. The Banded Greenhood is one of these, tending to favour zones around granite outcrops where they receive additional rainwater run-off, and also in deep acid soils (sheltered positions), particularly on the southern side of sandy hillocks supporting heath communities.


Easy to recognise due to the pronounced dark green bands on the light green translucent hood. Commonly growing to 300 mm (12") in height and with multiple flowers situated in leaf-like bracts. Flowering plants do not produce a basal rosette of leaves, but nonflowering plants do produce one.


If you check the labellum you will find it "irritable" ie movable. This permits an insect to enter the flower, but then the labellum flicks up behind it to temporally trap them inside. As the insect tries to get out, it brushes against the orchids sexual parts and pollen is deposited on it. When the pollen laden insect visits another orchid flower, the process is repeated and the pollen is passed on thereby cross-fertilising the flower. With the translucent hood you can often see this interaction between the orchid and the insect, so have a close look if you happen upon any. Banded Orchids flower from May to September.

Posted by William Archer at 5:41 PM